below is from the ad in the Portland Mercury. and features art by one of the best cartooners in the world, daniel clowes who will be debuting his enormous complete eightball collection there. for my part i should be debuting it will all hurt #3 there too. hopefully it will be ready in time for the show as i finished the comic right under the wire. you can read the entire IT WILL ALL HURT for free on studygroup.com

APRIL 18 + 19, 2015-Linework NW is a unique two-day event, with a different line up of exhibitors on each day. Don’t forget to come on both Saturday and Sunday to see the full range of creators, exhibitors, and publishers showing at the festival!

linework is a two-day show this year but i will only be tabling on SATURDAY, APRIL 18. but i will be walking around and possibly participating in panels on sunday as well as be available to sign it will all hurts from the press gang/studygroup table. here is the exhibitor list for both days.

AND just to reiterate, it will all hurt is being carried by diamond comic distributors. for issue two: APRIL PRE-ORDERS DUE APRIL 22, and issue #3 will be in the May previews under alternative comics.  orders have been pretty good so far. thanks to people bugging their local comic shop and thanks to comic retailers for taking a chance on such an outlier, and thanks to  Zainab Akhtar for the really nice beat article on it will all hurt.

here’s a handy pamphlet Marc Arsenault made to promote studygroup’s April & May books. and here is the cover to issue #3 in case you missed last months post. APRIL 15, 2015. running concurrent with linework the wrenchies pages will be on display all month at tiny’s on MLK not too far from the linework venue the norse hall where i am sharing wall space with one of my best buddies gabriel taylor. there is even a bigger collaborative painting by gabriel and i. here is a older and rawer grainy photo version of it: the reception is this wednesday, the 15th of april, 2015. there will be beer and coffee and food available for purchase. as well as some art to look at. i am not selling any more of the wrenchies pages i still have on my person but the beguling has a bunch for sale if you were interested. i have spent a lot of time in this coffee shop working on my comics over the years and is one of the first places i went to when i first moved to town. there is also a sold out electric wizard show that eve at the hawthorne theatre, which is very fitting as i thanked them in the wrenchies for helping me get that book done. fyi i am just a fan of their music and have no relation or attachment to any of the actual guys in the band. 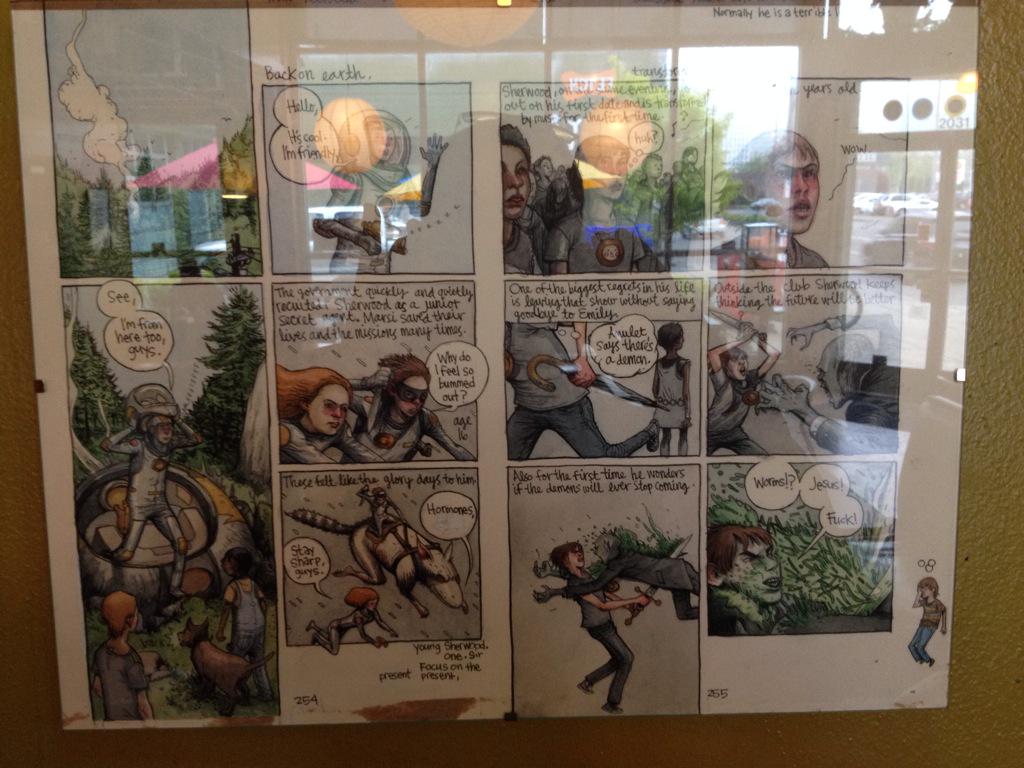 I will HAVE SOME WRENCHIES COPIES AND DELUSIONALS ON HAND TO SELL AND DRAW IN AT TINY’S AND LINEWORK. BOTH ARE FREE EVENTS.

also there is now a facebook page for the wrenchies. please go to that and “like” it if you are into that sort of thing.

and don’t forget about earth day on the 22nd. so try not to use gas or buy anything wrapped in plastic or something. DIY Magic: A Strange and Whimsical Guide to Creativity by Anthony Alvarado

the author of this excellent book Anthony Alvarado will be talking about it along with me and a couple of amazing local artists local artists: Eric Mast (aka E*Rock), and Jennifer Parks at Powell’s City of Books 1005 W Burnside St. between 10th and 11th Ave.Portland,OR503 228 4651 here’s a color and somewhat tweaked version of my illo i did for the book: